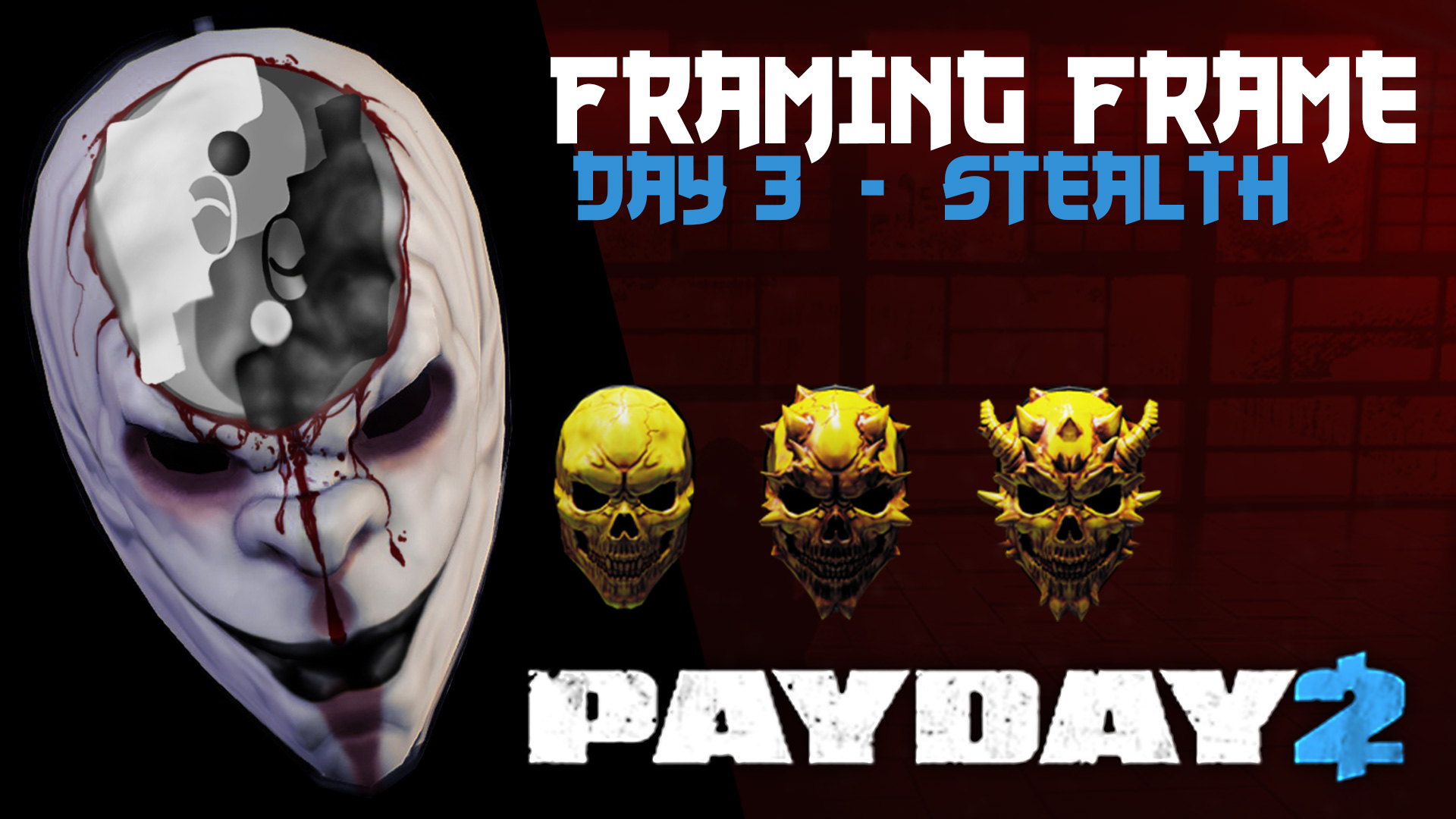 On the heels of our failed first attempt at Framing Frame, we’ve finally stolen all the available paintings and passed them off to our mysterious contacts in the helicopter. We’ve fought our way out of a cluster fucked train yard and made it to another mostly abandoned building where the last leg of this heist takes place.

PLANNING
In the assets portion of this heist, there are several good options. Perhaps mores here than any of the other heists in the game. Proper planning for this last day can speed up your time and help you spot out guards for a trouble-free criminal experience. This is one map that you’ll want to spend a little money for a HUGE payday.

LOADOUT
Aside from the obvious stealth load out (try to get a perception of 10 or less) make sure that you have a silent weapon that does some good damage. There is a ton of glass in this house that attracts stray bullets. You want to take down guards in one hit when possible so that you aren’t frantically shooting to take one down. This goes triple in Death Wish.

Bring four body bags. It doesn’t really pay to take extras since every enemy on this level triggers a radio on death. You’re can only kill four before they call in reinforcements, at which point you’ll want any other equipment.

One surprisingly useful item on this level is upgraded trip mines with the motion sensor option. Leaving them explosive will again result in wasted effort. The layout is fairly claustrophobic in here and each of the three floors has several access points from each adjacent floor. Guards get from floor to floor and one side to the other very rapidly. I like to trip mine the main stairwell and the front entrance to the floor that houses the vault. Since most of my time is spent running around on this floor – these end up being the most helpful.

ASSETS
Bag Shortcut – The two or three times we’ve actually completed this mission, we’ve encountered the hidden vault inside the senators bedroom. The Bag Shortcut dumps right outside his door making for quick turnaround between depositing the coke and moving on to stealing his gold. Without this asset, someone has to run each bag down the stairs. Remember – the more times you have to cross the same route, the greater your odds of being spotted. This asset is one of the most functional in the game.

Vantage Point – A I mentioned earlier, the more eyes you have around this level the better you’ll be able to keep track of the guards. These particular guards have taken some serious ninja training from Batman. They have a knack for popping up behind you as you’re backing away from their buddy.

If you’re lucky enough to have a guy on your squad who’s more patient than Zain, you can take the ‘Vantage Point’ asset and position him opposite your target. This building has a large floor to ceiling windows in the front where you find a good view of every floor.
Though you won’t be able to use the spot mechanic most of the time from the opposite building, you can call out enemy locations over comms. This is surprisingly helpful, particularly if you’ve agreed upon location descriptions ahead of time.

If you outfit yourself properly and exercise patience, this heist is a cake walk. You’ll know where the guards move before they arrive and you’ll be flying to safety with a crap ton of gold in no time.

CASING
The paintings that you’ve secured from day 1 [link that] are now outfitted with cameras and hung inside the Senator’s house. The mission starts with a laptop on the roof where you can access those cameras. If you’ve purchased the Vantage Point asset, this is the time to get someone in position across the way.

While you have someone on the cameras, take some care in choosing and placing trip mines. Be sure to activate the motion sensor or you’re going to find yourself dodging lots of bullets right up to that last one. It helps to locate the vault before you place your mines since the bulk of this mission will take place around that area.

HEIST
Now comes the tedious part. Here you have to walk around and locate the various computer parts so that you can attach them to the laptop on the roof and gain access to the vault area. While you CAN find the vault before you have these components, the game will not allow you to progress until you’ve assembled the device.

If you haven’t located the vault by this point, be sure to activate every bookshelf you pass when you can do it safely. Once you find the vault door, make sure to keep it closed since the guards like to wander. The last thing you need is a nosy guard wandering into the vault while you’re holding a pile of coke.

There’s no shortcut to finding the components that you need. Most of the time you’ll be able to spot all but one of them with the painting cams. Even if you managed to steal all eight paintings from day one, there’s typically one component hiding somewhere off camera.

As I said: Tedious.

Alright, once you’ve located all of the components and assembled them, it’s time to set up to take down the vault. By this point we’ve usually thinned the guard population down to two or three. Between the motion sensors and your spotters, these guys are really easy to track while they make their rounds.

This is where you’re going to be glad you bought the [loot chute]. Now your man on the roof cameras can transition to drug dealer as he feeds the bags of coke through the ventilation system right to where you’re waiting. There are a few different ways that you can pull this off – we’ve even done this mission as a two-man. Make sure that you have someone watching the chute exit, if one of the guards sees a bunch of coke in the hallway, he may think something is up.

Once you have the coke in place you’d be remiss not to stay and nab the extra gold. There’s no magic trick to getting this done. Do it by the numbers the same way you got this far. Have two clowns spot for you as you walk around the penthouse. We typically do it with one guy in the vault area keeping watch and another guy running bags. It isn’t impossible for both your inside men to run bags, you just increase chances of a guard standing in front of the vault without your knowledge. If you run the caper this way, I recommend that you do it slow, and have the Fugitive perk Sixth Sense. That extra few seconds you take to spot nearby enemies really helps. Once you’re down to the final two bags of gold make sure that both your inside clowns grab one as your man on the adjacent rooftop comes home and we all get out.

Once you have this down – try your hand at Deathwish.