Good Observation: See your enemy before he sees you. Make him respawn so that he never sees you.

There is more to observation than simply looking around.  If you watch the FPS Dojo on twitch, you may notice that while the squad moves across the map, Garlock constantly stops moving to scan the area around him. He most often stops in very specific types of terrain that offer him good cover or concealment.  Every now and then, he’ll walk into an area, and immediately whip around and watch the area behind him – blind spots.  These factors make him a difficult target to drop.

In this article we’ll be talking about Active Observation.  Active Observation requires intent.  Like your opponents, you have eyes and ears. The difference between survival and respawn timers is how you use your senses. In order to keep your squad alive, you must deliberately search for hostile targets.

In a perfect world we’d have ample time and opportunity to take the following steps in order and with great care.  The more common situation in games is that we have an objective to reach or a team to hunt down while they hunt us.  I recommend spending some time in-game specifically training yourself in these techniques as each game will require a slightly different approach.  Do make time outside of your normal play to hone your skills. 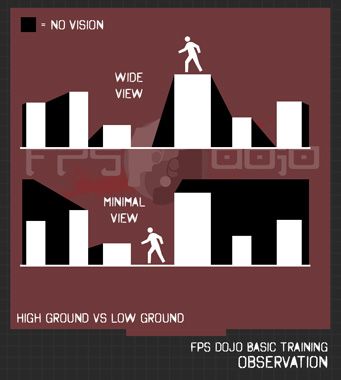 I’ll start by reiterating Garlock’s Gladiator Rule # 3: No one ever looks up.  This is the first reason to take the high ground – if not the most reliable reason.  The more logical point here is that typically, when you take the high ground, you gain the most vision.  In the valley, a man can only see to the edge of the mountain, but on the summit he can see in every direction.

Make certain that the routes you and your squad follow also offer the most vision. In games, the terrain may deviate from that of real life. In some situations, taking the high ground may blind you.

In 2006ish, a game called PREY released.  A distinguishing feature of its multiplayer was the ability to run across the walls and ceiling.   Those who excelled in this arena were the ones who kept watch in every direction.  This unique style of play meant that sometimes, the low ground offered the most vision.

Be in a position to observe as much of the battlefield as possible. 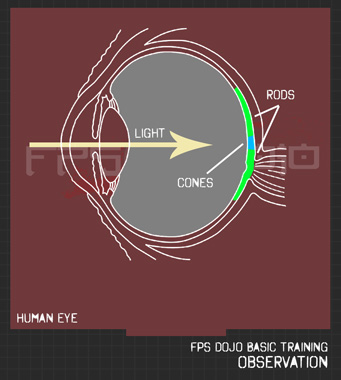 The human eye is built specifically to sense movement.  Inside your eye you have two types of photoreceptors: rods and cones.  There are ~120 million rods vs. ~7 million cones. Rods are responsible for sensing motion and peripheral vision, while the cones are responsible for determining color.

Take advantage of your species ability to detect movement.  When you are running around in Call of Duty, your entire field of view is in motion.  If you are moving one way, be aware of objects that are moving counter to that direction.   If you stop – your field of vision becomes stationary.  Your eye will instinctively react to anything moving.  More often than not, the object that is moving – is a target.

While you are running around the world scavenging items or hunting for your next frag, your enemy is looking for you.  When you choose an area to hunker down and watch your six, make sure that you’ve concealed yourself. The last thing that you want to do is help your enemy find you.

Always choose an area with lots of brush, debris or anything else that will obscure your silhouette.  If you find yourself with nothing but open field, at least crouch or go prone before you scan your surroundings for hostiles.

This is a strange one and it also takes some time to acclimate.  In the western world, we’re taught to read left to right.  Even our clocks move in that direction.  When you scan for hostiles force your vision to move from right to left.

The reason that we do this is simple: you are less likely to miss something when your eyes are outside of their comfort zone.  While your eyes adjust to the view, your pattern recognition filters are on overdrive trying to make sense of your surroundings.  You will see anything that doesn’t belong.

Identify any immediate threats and communicate them to your team.  The faster you spot hostiles the more time you and your team have to neutralize them.

At this point you are mainly looking for movement.  Any enemy with good cover will be very difficult to spot at this point. Basically you are making sure that you are not being followed. 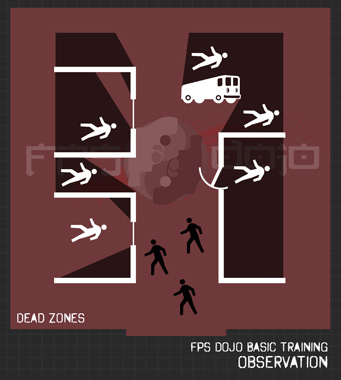 A Dead Zone is any zone in your area where a hostile threat can lie in wait without your knowledge.  Behind doors, in alleyways, under a porch or balcony and hunkered down behind a car are all good examples of dead zones.

It is important to identify these danger areas and approach them with caution.  This is where you want to lead with your gun as we talk about in Basic Training 002: Fields of Fire.

Dead Zones are responsible for many Ks on the big K/D chart of FPS games.  I can’t tell you how many times I’ve heard someone coming down a hall as I’m running nearby and I simply hug the wall as I walk so that I’m in a dead zone. Then, of course, I get accused of camping or hacking because that’s what weak players do.  They assume that you sit behind a door for days just waiting for people to run past you.

Here I’m talking about the foreground, the middle ground and the background.  I always scan from closest to further away.  Threats that are near me and within shooting range take precedence over those further out.  Remember to move your eyes from right to left while searching these areas.

Wear Headphones. A good pair of headphones provide several advantages on the battlefield:

The bottom line is that you can more easily identify the position of hostile targets while wearing a good set of headphones.

Attentive listening has helped me frag countless would-be killers.  I’ve spun around many times on hearing footsteps, knife swipes and various other ambient noises that people take for granted in games.  Several times on the stream you can hear me saying to Zain ‘there’s someone right behind me, if I stop running, I’m dead’ – to which Zain turns and erases them whenever he can.

Working with a team, all the observation in the world doesn’t matter until you communicate the information to your squadmates.  Absolutely be in voice communication. Bonus points if that voice communication is separate from the game that you’re playing.  If you have a secure out of game channel such as Teamspeak, Raidcall or Ventrilo there is little chance that you will be overheard in-game.

Determine some key words ahead of time that will efficiently communicate what you see.  We generally use a handful of key words and phrases:

We’ve used these simple commands for over a decade both at a casual and a competitive level.

In fast paced games with smaller maps, finding your enemy is fairly easy.  He’s the one bunny hopping around with a bright orange gun and helmet. Games with larger maps and slower pacing generally provide more opportunity for concealment.  While it is possible and preferable even in smaller games to move with intent, most players either don’t understand tactical movement, don’t care or simply don’t know that it’s possible.

The first and most obvious element to identify is movement.  Again, the human eye is built specifically to detect motion.  When you hunker down and begin your scan your eye will automatically show you every object that is in motion.  You simply cannot prevent your consciousness from being drawn to objects in motion.  You are hard-wired for it. 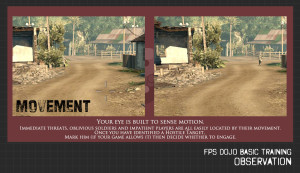 Look for anything that stands out.  Man-made structures have very regular lines.  Buildings contain straight, perpendicular lines.  Military vehicles are blocky and civilian vehicles are more aerodynamic.  A man standing against a building will break up the lines of the structure.   Vehicles in a forested area will be the only order within the chaotic jumble of foliage. 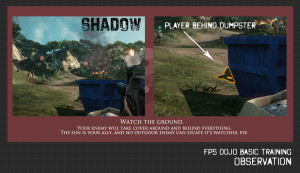 Silhouettes are easy to spot shapes.  A man standing on a hill or in front of a white wall wearing a black track suit.  Most FPS players don’t take their relative position into account when moving through their environment.  Snipers will camp on top of a hill with the sky behind them rather than positioning below the horizon.  If you are playing a game such as ARMA or Battlefield that has smoke grenades you can force the enemy silhouettes by firing smoke into or behind them. 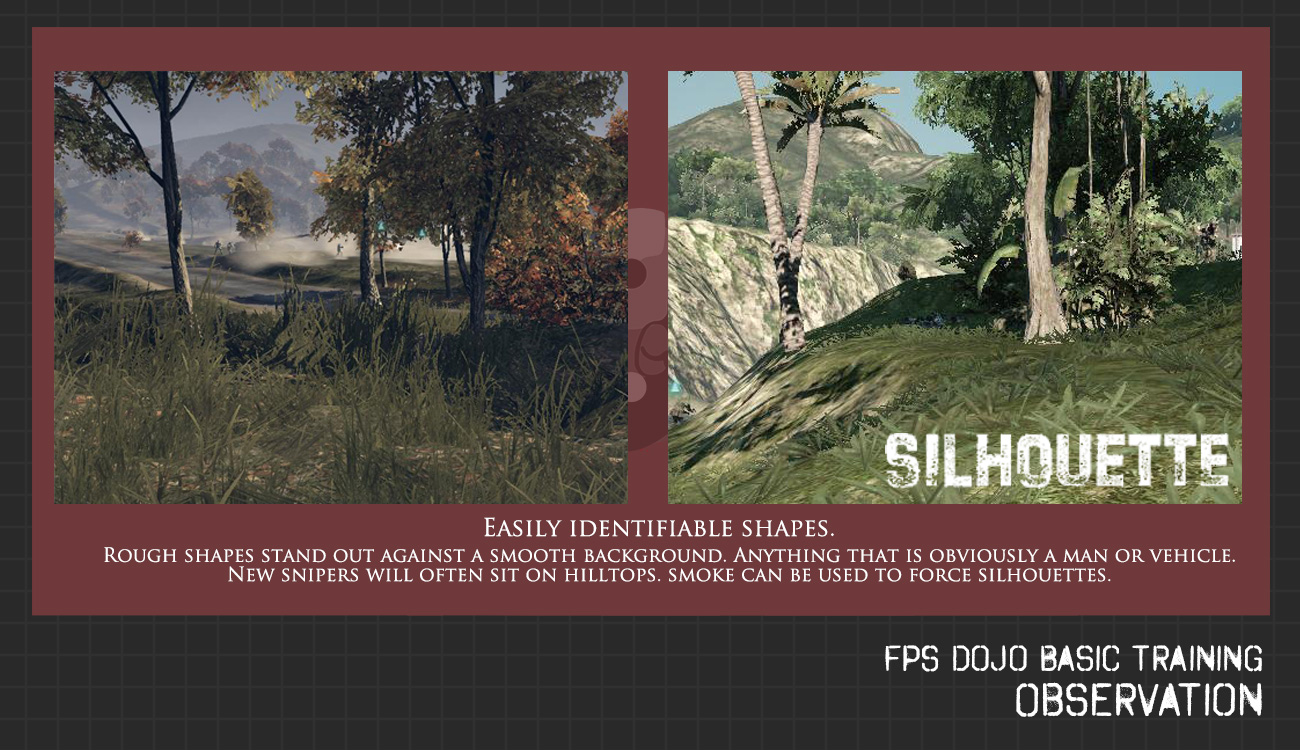 Light sources (including the sun) are something that most players disregard.  When a person is in front of a light source, they cast a shadow in most modern games.  If you watch out for them, this feature will net you many frags.  Shadows can let you know that your enemy is approaching before he sees you. 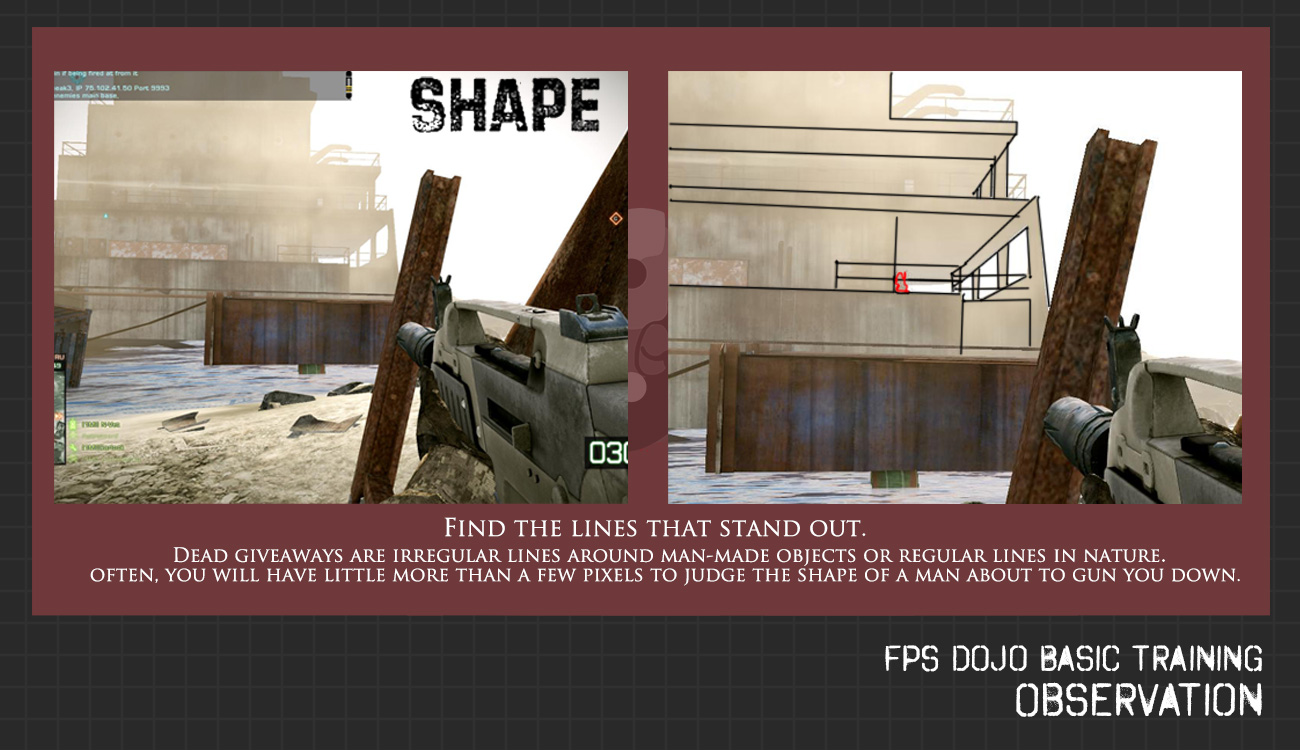 Texture may be the most difficult characteristic to make out in modern games.  Back in the old days, player models popped out of the background.  Even in camouflage, it was easy to spot an enemy because the game world rendered differently than it rendered the player.  We don’t have that luxury today.  In Battlefield, ARMA or any other game that offers multiple player clothing options, if your enemy is properly attired to blend with her surroundings, she will be difficult to spot.  Differentiating between various textures is a skill that you will have to develop in each game.

The example below is from Battlefield: Bad Company 2.  It is a screen shot that I took from some video of my gaming session.  I was reloading my Gustav after downing a tank when I saw this poor sap.  Yeah, I’m the reason that servers ban killing infantry with rockets.

These are complex techniques that I successfully employ when gaming.  I have honed my observation skills during almost two decades of high-level FPS gaming.  Learning these skills and using them is a lengthy process. I recommend starting with one or two at a time.  Once you have one mastered – add the next skill to your tactical observations.

When implemented even haphazardly, these skills are guaranteed to improve your K/D and to help you capture objectives for your team.