Gears of war was the first widely successful title to implement a decent gameplay device that revolves around cover elements. This gave rise to the inclusion of chest high walls in modern shooters. Everywhere you go there’s some sort of concrete or wooden barrier that you could not only hide behind, but your character then snaps to the surface which would in turn prevent you from getting hit.

When this game released I had to stave off massive disappointment. Gears of War single-handedly educated the masses in the use of cover. Up until this point most people would just run around in games like clowns in the center ring of the big top. Very few would actually position objects between themselves and your bullets. It was like one of the magicians gave away the secret to a classic magic trick: how to survive an encounter with full health.

Though the chest high wall is certainly the most obvious cover object on virtually every battlefield, it is not the only source of cover. Trees, vehicles, walls and buildings are all great spots that you can use for a moment’s respite while you reload or your shields recharge.

The only real requisite for something to be considered ‘cover’ is that it stop bullets, and you can stand behind it. Take special care when choosing irregular objects to note the lines of sight available to incoming fire. This is also the area that you will be able to protect. 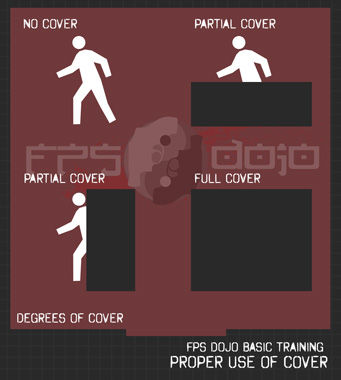 Vehicles will typically have an open area between wheels where you can shoot or be shot. I’ve fragged many an enemy who doesn’t pay attention to this critical detail. Grenades roll nicely below trucks and launchers allow you to it from a distance.

There are some less obvious objects that are in the ‘cover’ category. If you’re running past a building, hug a wall. Even though, strictly speaking, you aren’t behind the wall, you’ll not need to worry about enemy fire hitting you from that direction. Any time you can eliminate a direction from which you can be shot – you’ve used cover.

World boundaries sever a similar purpose as to ease your mind. These invisible walls don’t exactly provide you with cover, and typically if the map is in an ‘L’ shape you may be able to take fire from around the corner. Take note of your map boundaries and when you can use them to your advantage.

So when is it time to shoot and when is it time to hide? The best time to use cover is obviously when you are taking fire. If someone’s shooting at you, make yourself small and get behind something that will protect you. While this is the most obvious time to use it, you want to train yourself to deliberately move in such a manner that keeps you behind cover as often as possible.

Always take note of the nearest cover area. Ammo is your friend. Most games today offer you the privilege of self spawning ammunition. You’re going to run out at the worst possible times. Sure, your first instinct should be to switch to your secondary weapon, but think of that as your final warning. Once you’re using your pistol – you’re typically down to single digits. This is the time you’ll want to duck down and find a shady spot. If you’ve let it go this far, you’ll likely need a good ten seconds to reload all of your weapons and be ready to fight again.

Closely monitor your shields/armor and hit points. Many games will allow you to regenerate one or the other. If your shields deplete, just get behind some cover and wait for them to regenerate. Take this time to make sure that you’re reloaded as well so you can jump out into the fray Butch and Sundance style.

A great tactic to use when you’re in a group with several people is the decoy. One of your squad (preferably the person with the quickest character or best dodge rating if you’re offered such things) will run out into the enemy field of view but not stop until he’s behind cover. Most people cannot resist getting a kill in games. People identify their skill level with their kill to death ratio.

Use that vanity against them. 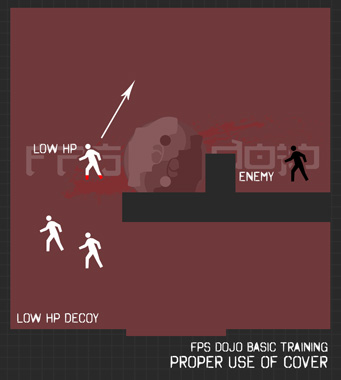 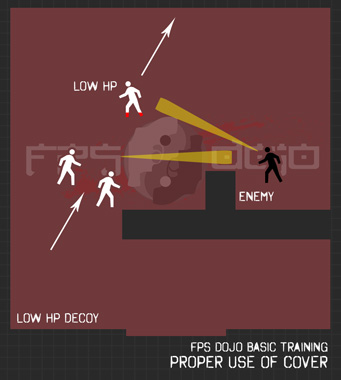 As your man runs through and dives behind cover, you simply wait for muzzle flashes, sounds of gunfire or tracers and then kill the other enemy while your teammate is in the clear. Granted, this is certainly dangerous for the guy running, but your other squad mates should have ample time to take down aggressors. Even if your teammate dies, odds are you’ll take down several of theirs for your one loss.

When I’m low on HP in a game such as Rainbow Six, and I know that the enemy is camping in a certain location, I’ll tell my squad mates.  Then I’ll run out into the open to give him something to shoot at.  Most of the time, my squad is good enough to take him down before I get popped, but even if they don’t it’s not a huge loss so long as I have like 10 HP or less.

So you read our previous article about moving under cover where we talked about Bounding Overwatch. There we told you a simple technique for moving from cover to cover in order to have a small force make its way across the map. But what about those times when you simply need to get to another location quickly? How do you use cover to your advantage?

In this example, you still have to identify objects that you can use for cover as you make your way to your destination. What you’ll do is weave in between them so that you can have cover as you run.. Pillars of a Greek style building are the easiest example. What you’ll do is run behind a pillar and then without stopping, continue your forward movement to the next pillar or object that you’re using for cover. These can be anything that we’ve described. 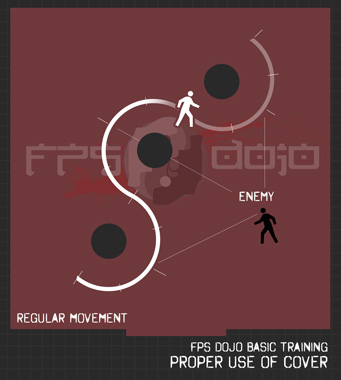 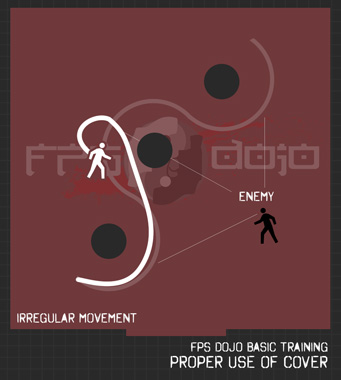 The most effective way to weave is to avoid regular patterns. When you run behind your object, sometimes, don’t come out on the other side. You’ll want to make your progress more difficult to anticipate . If you stick to weaving back and forth in a regular rhythm, your enemy will track across the object and simply wait for your head to pop out from the other side and then take it clean off.

If, however, you vary your speed and or direction, then he’ll have no idea when you’re going to appear.  Even better, if you exit the same side that you entered, he’ll likely need to adjust his positioning and you can use that split second to acquire him in your sights and eliminate him before he can react.

The bottom line is that unless you want to be shot in the face, be unpredictable.

Five guys in the game function as a single unit.

If you haven’t seen the film ‘Hoosiers’ starring Gene Hackman, I cannot recommend it enough.   Before we start today...