Field of fire: The area around a weapon that can easily be reached by bullets.
That’s the simple definition.  It certainly does not tell the entire story.

Your field of fire is basically the area in front of you where death will follow if you pull the trigger.  It is important to know where you will be raining death since you might have teammates around, hostages or neutral NPCs that don’t react too well to bullets or any number of other things in your path.   Each weapon in each game will have slightly different accuracy, but for the most part – you shoot what you can see.

As you walk around in-game, imagine a long cone that starts right at the barrel of your gun and extends for 100 meters or so out in front of you.  Anything that crosses inside that cone is in danger of you force feeding it a lead salad.  This means monsters, enemy players, walls, cars and even your own teammates. 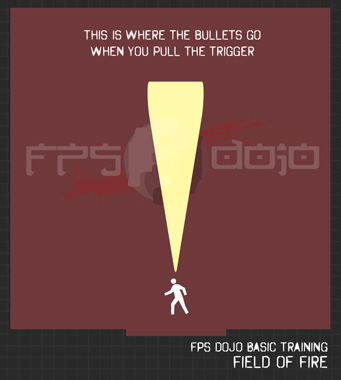 I’m sure at this point, those of you nodding your head and rolling your eyes since this is not revolutionary knowledge, are the ones who play Call of Duty or Counter Strike – both games where by default, you cannot damage your own team.  It’s like an FPS mode for little kids.  If you want to play with your big boy pants on, then you need to pay fucking attention.  A player with mastery over his fields of fire has the following qualities:

Furthermore, if you’re playing with me and you aren’t aware of your field of fire, you also might find yourself respawning because I’m aware of mine.

When you’re walking around in a shooter – you are automatically looking in the direction that you will be shooting. For the most part, you are always facing your field of fire.  However, there is a difference between LOOKING where you will be shooting and LEADING with your gun.

Leading with your gun means that you are ready to shoot at any moment.  You are not just looking around with your mouse, you are SCANNING the environment in front of you for potential threats.  We’ll talk more in-depth about scanning the environment when we talk about concealment.  As you move, you actively place objects within your field of fire.  At any moment you can make them dead. 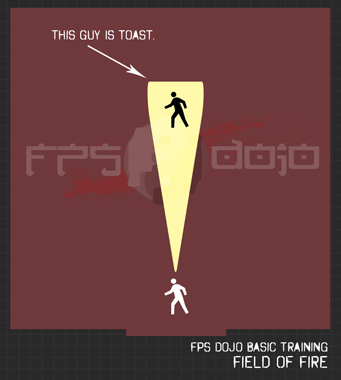 Let’s assume for now that you’re playing a team game and the ‘Friendly Fire’ option is set to ‘off’.  In this mode, you cannot damage your own team.  Walking right up to a teammate and shooting him in the face will only deplete your supply of bullets. It won’t damage him in any way.   This is the default setting for many of the most popular FPS games.  Call of Duty, Counter Strike, Halo and Battlefield all start with friendly fire disabled.  This setting provides you (and your teammates, Mr. Spray and Pray) with some great advantages.

In this mode, passing knowledge of your field of fire will suffice.  The main point – the bullets go roughly in the direction that you are aiming.  That’s really all you need to know – point and shoot.

You DO, however, be acutely aware of enemy fields of fire.  Stepping into them means respawning.  The same way that you imagine a cone of death sweeping out in front of your own weapon, do the same for every weapon that you encounter.  Furthermore, always assume that your enemy is a crack shot.  Think of his field as certain death and you’re far less likely to walk into it.

This is also where you benefit from leading with your weapon.  If your opponent is simply running from point to point, it’s likely that he will have to turn in order to fire at you.  As they turn, you pull the trigger.

For advanced players, let’s talk tactics.  The main advantage of FF=OFF is that you can assume defensive positions that would be nonsensical in real life.  You and your friend can sit in a hallway, aim your guns at one another and wait for someone to walk between you. 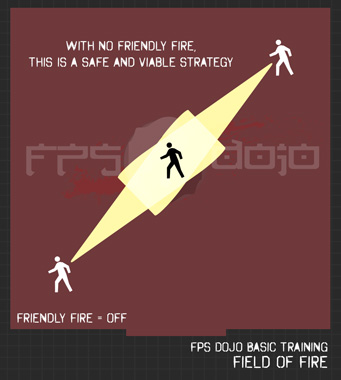 An added perk is that when a teammate surprises you by entering your vision (typically due to your lack of awareness) shooting won’t kill him.  In fact, I advocate shooting first no matter what. It’s better to be alive and apologize than waiting to respawn.

Another tactic that benefits from FF=OFF is the ambush.  You and your team can send a rookie out to bait the other team to you.  Have him lead the enemy team into a small ambush point.  As soon as they enter, you can unload into the kill zone without fear of harming your teammate. 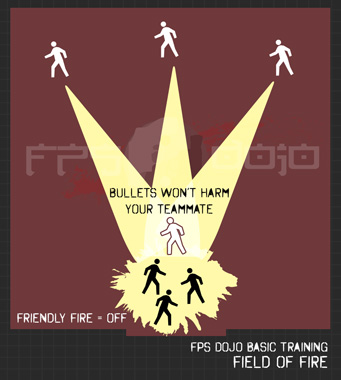 Here’s where you get your money’s worth from this article.  GREAT FPS players are aware not only of their own fields of fire, but of the enemy fields of fire as well as those of their own team.  Before we get started, here’ a cautionary tale of what can happen if you are NOT aware of these fields of fire.

If we go back to the earlier examples and now turn the friendly fire on, we can see a totally different picture of the battle field. 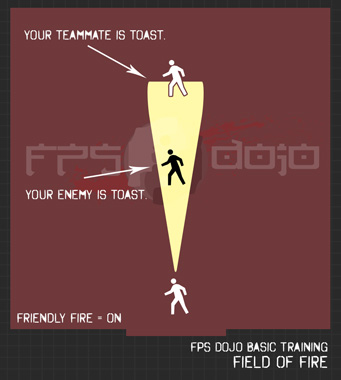 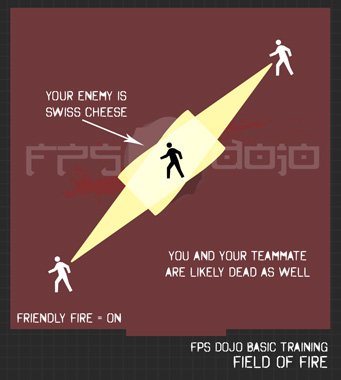 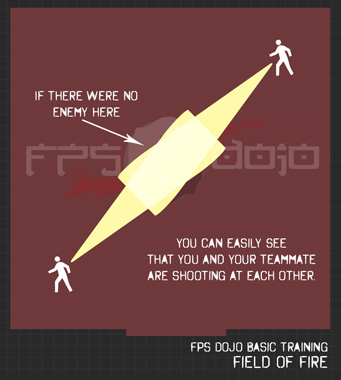 When you are fully aware of your fields of fire, you know that when you pull the trigger in one of these positions, you are shooting your teammate.  Every time you fire up a game, picture that cone of fire in your mind.  Understand the positioning of both your allies and your enemies.  FF=ON means that if you walk in front of any weapon in the process of firing, not only are you going to respawn but it is your own fault.

If we take a second look at the ambush example we now know that to be outside the kill zone, your bait will have to step to the side as soon as he enters the room. 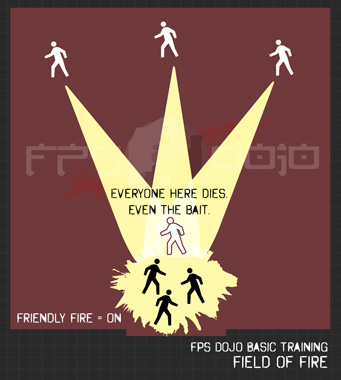 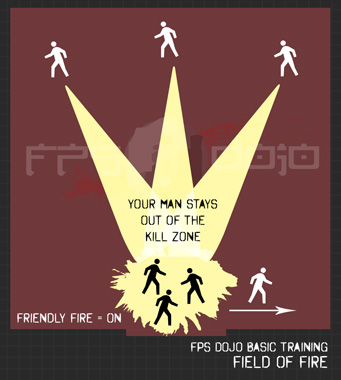 Now that I’ve covered the basics, think about this in terms of movement. How do you and your squad maneuver around the battlefield efficiently?  Zain, Hunta and I frequently roam the wastelands in the game NETHER.  In this game, PvP is enabled everywhere except for specifically designated safe zones.  If we don’t mind our fields of fire, we could end up shooting each other.  The three of us take up a very simple line pattern.  In this 3-man formation, each person is responsible for watching a different area.  Zain takes point (the front), Hunta is second and I’m on rear guard.  The point man scans the area in front of us.  Middle man is responsible for the sides – ideally you want 2 reliable middle men, one for each side – and the rear guard watches the area behind you to prevent someone from sneaking up on you. 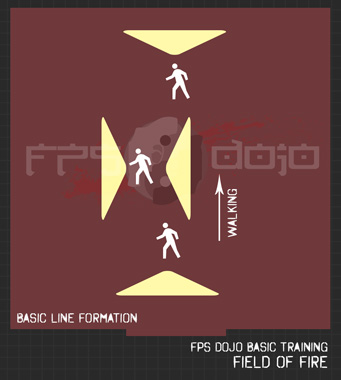 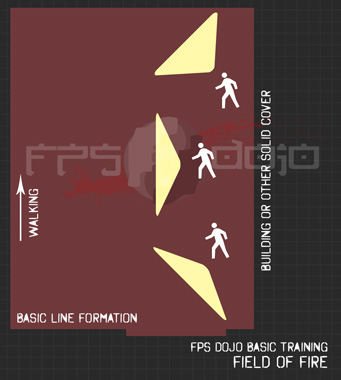 This allows us to assess a variety of threats and handle them quickly.  Once someone detects a hostile we immediately alert the team and stop to assess. The human eye detects movement most efficiently, so stopping immediately minimizes our chances of being detected if we haven’t been already.  We use a typical clock direction system where our intended destination is 12 o’clock.  From this position, the threat is already covered by one of our shooters, and the other two simply swivel around to bring it into our cones of fire.  If the first person hasn’t killed the hostile by this point, we discuss and execute very quickly.  By now, we have the hostile covered by three separate shooters in different locations.  For him to shoot, then turn then shoot two more times is almost impossible before he is dead. 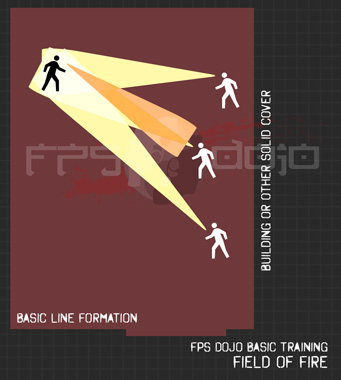 In 1757, during the French and Indian War, Major Robert Rogers created a set of 28 rules for his men.  You can find them here in their entirety.

Whenever you are ordered out to the enemies forts or frontiers for discoveries, if your number be small, march in a single file, keeping at such a distance from each other as to prevent one shot from killing two men, sending one man, or more, forward, and the like on each side, at the distance of twenty yards from the main body, if the ground you march over will admit of it, to give the signal to the officer of the approach of an enemy, and of their number.

In other words: March so that one bullet cannot kill more than one man.

In modern day shooters, the range on weapons is such that you’d have to be pretty far apart for this to be a truly effective strategy, so I’ll revise it:

When travelling in single file, stagger your line so that one bullet cannot pass through more than two bodies.

This is how the three of us travel whether in the wastelands of DayZ or NETHER or in a game with smaller more controlled maps like Battlefield or Counter Strike. 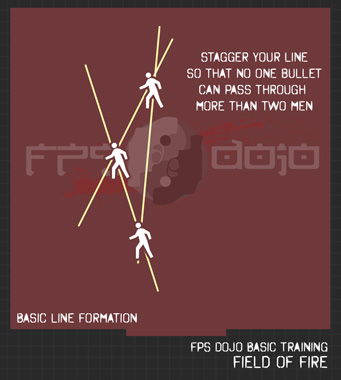 It is not possible to remain outside your enemies’ field of fire at all times. If you follow the simple guidelines that I’ve outlined in this article and maintain awareness of fields of fire, you can reduce the amount of time that you spend in harm’s way and you can kill your enemy before he kills you.